On November 5, 2021, the U.S. Congress passed President Biden’s major infrastructure bill, HR 3684, the $1.2 trillion ‘‘Infrastructure Investment and Jobs Act.” The President is expected to sign the bill into law. The bill is the largest single federal investment in infrastructure in a generation, with the funds to be expended over five years. It aims to rebuild and replace failing, aging, and outdated water, energy, transportation, and communications systems. As the first significant federal investment in climate resilience, it also begins to address the growing consequences of climate change, including intensifying extreme weather events, increasing temperatures, and rising sea levels, on communities throughout the United States.

One key component of the Act is the set of proposals to address the wide range of water-related challenges facing the United States. This Pacific Institute analysis provides an overview of how the Infrastructure Act addresses these challenges. The Pacific Institute will also issue a more detailed Issue Brief.

Continuing to neglect these water problems will further impoverish and sicken this and future generations, while increasing threats to our economy and food supply. Conversely, smart water policies are projected to create hundreds of thousands of jobs, improve public health, address long-standing disproportionate impacts on frontline communities, and speed economic recovery.

In September 2020, the Pacific Institute released a set of water-related recommendations for the new administration. Some of the most important of these recommendations are:

The Infrastructure Investment and Jobs Act

The new Infrastructure Act addresses many of the priorities laid out in the Pacific Institute’s recommendations. It provides the most comprehensive opportunity to help tackle America’s water problems this century. Of the $1.2 trillion authorized to be spent over five years, the Act dedicates approximately $82.5 billion for a wide range of critical water investments. Table 1 provides only a broad overview of the major water-related priorities in the bill. More details will be available in a new Pacific Institute Issue Brief. 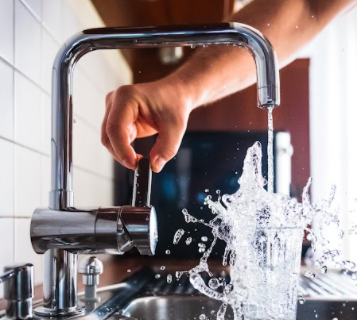 The largest water-related investments in the Act are for improvements in safe drinking water and sanitation throughout the country, including around $24 billion in grants over five years directly to the states under the existing Federal Water Pollution Control Act and Safe Drinking Water Acts. An additional $15 billion is provided for projects to replace lead water pipes and service lines, like those responsible for the severe contamination incident in Flint, Michigan, and remaining lead pipes in other cities around the country. Another $9 billion is allocated for addressing a set of new, dangerous, and unregulated pollutants, including perfluoroalkyl and polyfluoroalkyl and other “emerging contaminants,” long neglected by current federal law.

Federal infrastructure investments have historically supported the construction of major water-related infrastructure projects, such as dams, aqueducts, irrigation systems, and river and port transportation systems. The current bill is no exception. A major difference, however, is that the new investments refocus funds to modern, 21st century priorities that increasingly involve a longer-term water resilience view. For instance, the bill includes investments in some nature-based solutions, including ecosystem restoration, as well as water efficiency, water reuse, flood and drought programs, dam safety, and rural communities. In this way, we see a shift away from the 20th century primary focus on building major dams and water diversions toward a more comprehensive and integrated approach. Read more about the Pacific Institute’s view on water resilience in this blog and Issue Brief.

In the current bill, the U.S. Army Corps of Engineers and the U.S. Bureau of Reclamation, the agencies traditionally charged with managing the nation’s federal waters, are authorized to spend approximately $25 billion over five years for a wide range of these new investments. Another $2 billion is set aside for specific regional water protection programs in the Great Lakes, Chesapeake Bay, San Francisco Bay, Puget Sound, Long Island Sound, Gulf of Mexico, South Florida, Lake Champlain, Lake Pontchartrain, Southern New England Estuaries, and the Columbia River Basin.

Water science also receives support in the bill. The National Oceanic and Atmospheric Administration and the Natural Resources Conservation Service of the Departments of Commerce and Agriculture are authorized to spend around $3.9 billion for new hydrologic science and modeling programs to help predict, detect, and prevent extreme events and wildfires that destroy watershed health and water quality, and for a range of ocean programs.

Importantly, the new legislation corrects some of the historical inequities previous infrastructure bills and federal water policies have perpetuated on frontline communities, who are disproportionately affected by water insecurity. For example, Section 50108 of the bill requires the EPA Administrator to submit to Congress a comprehensive report on municipalities, communities, and Tribes that must spend a disproportionate amount of household income on access to public drinking water or wastewater services or that have unsustainable levels of water-related debt. Importantly, the report must also include the Administrator’s recommendations for how best to reduce these inequities and improve affordable access to water services. The EPA must also provide grants to states and Tribes to help schools test for and remediate lead in drinking water (Section 50110), and grants to improve water quality, water pressure, or water services on Native American reservations by prioritizing projects addressing emergency situations occurring due to or resulting in a lack of access to clean drinking water that threatens the health of Tribal populations (Section 50111).

Support is also provided to expand the careful management of stormwater and the sophisticated treatment and reuse of wastewater, two priorities identified by the Pacific Institute for addressing water challenges across the United States:

Many other sections of the Infrastructure Act tackle water issues and will be summarized more fully in the forthcoming Pacific Institute Issue Brief, including projects to:

Finally, there are additional investments provided in the Bill for non-water projects that provide water co-benefits. A few examples include:

As with all federal legislation, the final bill was a compromise, shifting priorities based on political and financial considerations. Many important investments in initial versions of the bill were watered down. For example, earlier drafts included far more money to help remove legacy lead drinking water pipes. While the $15 billion provided in the final bill is a start, far more funds will have to be found to complete that vitally important job.

It’s important to point out that the ultimate success of these investments to address U.S. water problems will depend on how the authorized funds are actually allocated and spent. Success will also depend on the ability of federal agencies, states, local communities, and Tribes to create and mobilize jobs, find additional investments, and implement needed projects.

The water investments provided by this new Act are important steps in the right direction. They are not, however, enough—alone——to prepare U.S. water systems to become fully resilient, as they need to be to withstand the stresses and shocks of climate change. This will require an all-hands-on-deck approach to ensure people and nature have the water they need to thrive and all communities are protected from intensifying water-related disasters.

(Includes most, but not all, fund authorizations related to U.S. freshwater resources. Most authorizations are over five years. See bill for specifics and details.)