The Environment, Climate, and a Global Pandemic

The 2020 Coronavirus Pandemic is having the unexpected and unintended effect of teaching us lessons about both the vulnerability and the resilience of our natural ecosystems and environment. As of this writing in late April, we are still in the middle of it, with no obvious end in sight, as the virus continues to spread around the world. Some of the regions where it first struck are trying to emerge from the crisis after imposing strict and widespread testing and quarantines. Other regions that failed to react quickly or effectively are still, or will soon, be suffering even worse consequences.

Without an actual vaccine, and with limited and overwhelmed medical facilities and supplies, the most important tool to combat the spread is isolation, quarantine, and a shutdown of non-essential economic activities. This is taking a costly toll on jobs, income, economies and markets, and financial institutions.

It is also having a range of environmental consequences, both good and bad. Some of these will be short-term and temporary. Depending on how individuals and governments respond, some may be longer-term and permanent. The ultimate impacts will depend on the lessons we learn and the actions we take.

In the short-term, there have been some important, positive consequences for air quality as reductions in industrial activity, reduced air travel, and a drop in gas and diesel-powered transportation have led to drops in the emissions of air pollution from the burning of fossil fuels. This effect was first noticed in China and Italy, when quarantines were put in place, and has been observed by satellites, ground-based measurements, and people just looking up. Figure 1 and Figure 2 shows decreases in nitrogen oxide levels in northern Italy and China as measured by NASA and European Space Agency satellites. An analysis published by Carbon Brief estimated that greenhouse gas emissions in China declined by 25% in mid-February from typical levels – a huge drop. 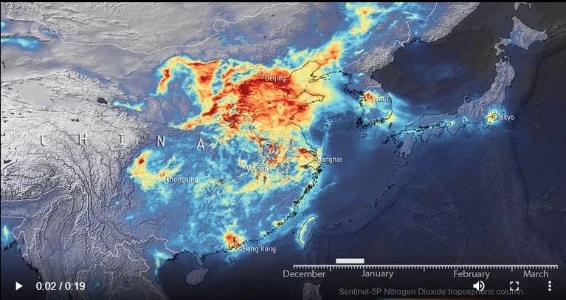 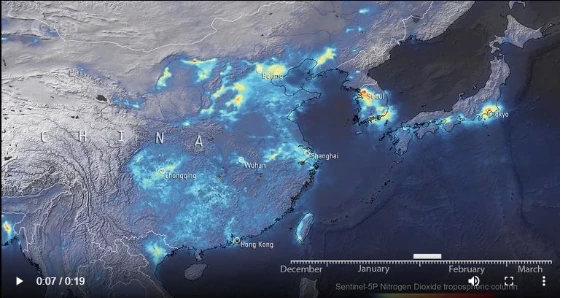 India imposed a 21-day lockdown in late March and early April and improvements in air quality were immediately noticed. Data from India’s Environment Ministry Central Pollution Control Board showed a 71 percent decrease in nitrogen dioxide levels in New Dehli, and Mumbai, Chennai, Kolkata and Bangalore also recorded large decreases. Overall, 85 Indian cities noted an improvement in air quality during the first week of the lockdown and in Jalandhar, Punjab, residents reported seeing snow-capped Himalayan mountains more than 100 miles away for the first time in memory. These improvements in air quality will also be accompanied by some real, albeit short-term improvements in health.

Overall, some estimates are that greenhouse gas emissions my drop by around five percent this year, for the first time since the industrial revolution, though the final change in emissions will depend entirely on what happens to economies over the rest of 2020. And for context, in order to reach even the minimal climate targets set by the Paris Agreement, which are understood to be simply a first step in efforts to tackle climate change, the world would have to achieve a 7-10 percent drop in emissions every year until mid-century.

Other short-term improvements have been reported, including modest drops in urban water use in California as industry and commercial business close (slightly offset by small increases in residential water use as people stay home), and a wide range of reports of modest improvements in some ecological indicators and the behavior of animals (improved conditions for sea turtle nesting, funny stories about goats taking over a town in Wales, and reports of kangaroos on the streets in Australia and javelinas in Arizona).

Most importantly, however, without fundamental long-term changes in our economic activities and energy systems, such short-term improvements are almost certainly going to be temporary. By the end of March, as the coronavirus crisis was brought under control by China, coal combustion had increased again, and air quality was again declining. Nitrogen dioxide pollution levels, measured both from NASA satellites and Chinese government stations, have also already returned to normal.

But there is bad news as well, especially in the area of politics: the coronavirus has served as an excuse and an opportunity for conservative efforts to repeal, suspend, and ignore environmental laws and regulations. The Trump administration, in particular, while downplaying the pandemic, has also used it as an excuse to waive environmental rules and enforcement:

“In general, the EPA does not expect to seek penalties for violations of routine compliance monitoring, integrity testing, sampling, laboratory analysis, training, and reporting or certification obligations in situations where the EPA agrees that COVID-19 was the cause,” the US EPA announced.

The Trump administration is also moving ahead with its broad anti-environmental rollback and weakening of legal protections, including auto fuel-economy standards, air-quality standards, and mercury and toxic metal rules from coal and oil power plants. In mid-April, the Trump administration announced it would not tighten a critical air-quality standard around damaging particulate pollution despite scientific warnings that current rules are too weak and lead to tens of thousands of premature deaths. Substantial amounts of US federal bailout money are going to polluting industries rather than clean ones – leading to an enormous missed opportunity to accelerate the transition from a polluting economy to a more sustainable one.

The longer-term environmental impacts of the pandemic are harder to see because they depend on actions still to be taken. We do not know how long the shutdowns will last, how effective the pandemic responses will be, and what societies and governments will do to invest in alternatives and solutions. We do not know how much pressure the public will put on policy makers in calling for fundamental changes in the ways we do business, produce energy, and organize society, as opposed to simply going back to business as usual.

We have an opportunity to invest in clean air and water strategies and technologies; build clean energy systems to eliminate fossil fuels; expand electric vehicle programs and phase out polluting transportation; open our cities to pedestrians and bicycles; and protect natural ecosystems in new ways that enhance rather than destroy chances for wildlife. But grabbing that opportunity is going to require public awareness and pressure to make permanent some of the improvements we now can only glimpse because of this crisis.