California’s Salton Sea is a fertile oasis in the hostile desert of southeastern California, adopted by millions of birds migrating along the Pacific Flyway. As California’s largest lake, it stretches across almost 35 miles in a remote, below sea-level valley in the southeastern corner of the state. Current Salton Sea information is posted below.

The Sea faces a host of challenges, including a declining water supply, rising salinity, very high levels of nutrients that generate excessive algal growth and very low oxygen levels, and, to date, a glaring disconnect between the rate of change and the rate of efforts to address that change.

2017 data reflect an average of March & June samples only (note that ppt is a mass/mass ratio, while g/L is mass/volume; they are not equivalent at higher salinities).
Source: Bureau of Reclamation

General Salton Sea Information from the U.S. Bureau of Reclamation

Audubon’s webpage on the Salton Sea 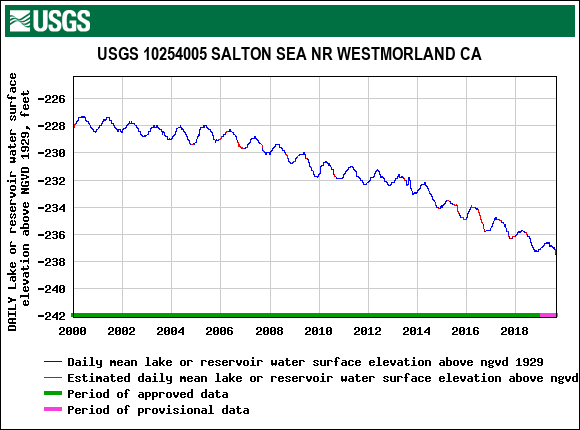