In the past few years, severe droughts in India and Iran have led to a big increase in conflicts over access to irrigation and domestic water and to demonstrations against water diversions from one community to another. The violence and war between Russia and Ukraine that worsened in 2014 and expanded again with the Russian invasion just a few weeks ago have included attacks on civilian water systems and the use of water as a weapon. Growing population pressures combined with worsening ethnic and religious conflict in sub-Saharan Africa continue to lead to hundreds of deaths a year from violence between pastoralists and farmers over scarce water resources. And computerized water systems are experiencing growing cyberattacks that threaten water safety, quality, and reliability.

These are just some of the findings of the newly released update of the Water Conflict Chronology, the most comprehensive open-source database on water-related violence, from the Pacific Institute. The Pacific Institute has been compiling and maintaining data on water conflicts since the late 1980s, and the latest update, released in mid-March 2022, brings the number of events to over 1,300, going as far back as the earliest known water war, in ancient Mesopotamia, 4,500 years ago. 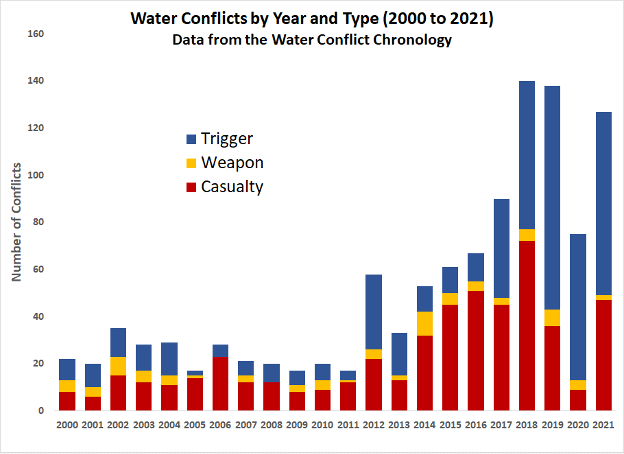 The data in the Chronology also point to both the importance of reducing violence associated with freshwater, and to identifying strategies that might be effective. Among the most important tools for reducing water conflicts would be accelerating efforts to meet the Human Right to Water, declared by the United Nations in 2010, and to provide basic safe water and sanitation for everyone – an objective of the UN’s Sustainable Development Goals for 2030. The failure to meet basic human needs for water contributes to the tensions over access to water, especially during droughts and extreme events. Strategies to enhance and enforce protection of civilian water infrastructure during war, including existing international laws of war such as the Geneva Convention and its 1977 Protocols, could reduce the intentional targeting of water systems during conflicts. Diplomatic efforts should also be ramped up to help resolve disputes over shared international water systems and over rights to water and land, such as the longstanding conflicts in Africa between pastoralists and farmers.

Finally, the growing threat of human-caused climate change is already worsening water conditions around the world, deepening droughts, enhancing flooding, and disrupting water infrastructure. A key strategy to reduce the risk of water conflicts around the world must also include efforts to slow and eventually stop climate change and to reduce the severity and extent of now unavoidable impacts on water.

Fresh water is a vital resource, necessary for all aspects of a sustainable future, including meeting basic human and ecosystem needs and providing the goods and services all societies want. Unless strategies for moving from water conflict to water cooperation are pursued and implemented, violence associated with freshwater resources seems likely to continue to increase. That’s not the path we want to be on.