March 17, 2022, Oakland, California — Last week, a few days into the Russian invasion of Ukraine, Russian forces destroyed a dam blocking a water canal from Ukraine to Crimea, restoring flow that had been cut when Russia annexed Crimea in 2014. The cut off of water at that time deprived Crimea of a critical source of irrigation water for agricultural production. These water conflicts are just the latest in a long history of violence associated with freshwater resources, tracked by the Pacific Institute for over three decades.

Three hundred new instances of violence over freshwater resources have been identified in a new assessment by the Pacific Institute. The Institute today released a major update and expansion of the Water Conflict Chronology, the most comprehensive, open-source database on water conflicts around the world.

Created during the 1980s by Dr. Peter Gleick and the Pacific Institute, the Chronology tracks and categorizes events related to water and conflict in the form of a database and an interactive map. It provides information on events where water or water systems are a trigger, weapon, or casualty of conflicts when there is violence or threats of violence. The Chronology extends back over 4,500 years to the first known water conflicts in the ancient Middle East and includes over 1,300 entries with the new update. The numbers of events have grown dramatically since 2000 (see the figure below).

The updated Chronology finds the past few years have seen growing numbers of drought-related conflicts over access and control of water in places like Iran and India, attacks on water infrastructure in Crimea and Ukraine as tensions between Russia and Ukraine have exploded, ongoing violence in Central Asia over disputed rivers, continued ethnic violence between pastoralists and farmers in Africa, a growing number of disputes over mining and water contamination in Latin America, and several instances of attempted cyberattacks on urban water systems.

The Chronology also highlights how intensifying climate changes are worsening pressures on water resources around the world. These pressures are contributing to water scarcity, floods, and droughts – among the key causes of water-related violence.

“Violence associated with competition and disputes over freshwater resources has continued to worsen in recent years,” Dr. Gleick said. “These events highlight both worsening competition for fresh water and the growing consequences of human-caused climate change in the form of droughts and floods. Of special concern is civil unrest over water scarcity and the control of local water resources, and a growing number of attacks on civilian water infrastructure during conflicts and war around the world.”

“Efforts to reduce tensions over fresh water must include accelerated action to provide basic safe water and sanitation to the billions of people that still lack these water services, diplomatic efforts to enforce international laws of war protecting civilians, and more cooperative management over rivers and aquifers that are shared internationally,” Gleick said.

The new revision includes a substantial increase in the total number of entries. These additions come from news reports, published accounts, and databases that track violence and conflicts globally. Examples from the new entries include small-scale violence in communities where water is scarce or control of water is disputed, as well as large-scale international disputes over shared rivers and waters.

The information provided for each entry includes the year(s), a description and summary of the event, the location, geographic region (using United Nations Geographic Regions definitions), the type of conflict (trigger, weapon, casualty), and a source for the information.

The data may be found here.

An interactive map of all water conflicts may be found here.

Figure 1: The number of water-conflict events since 2000, worldwide. 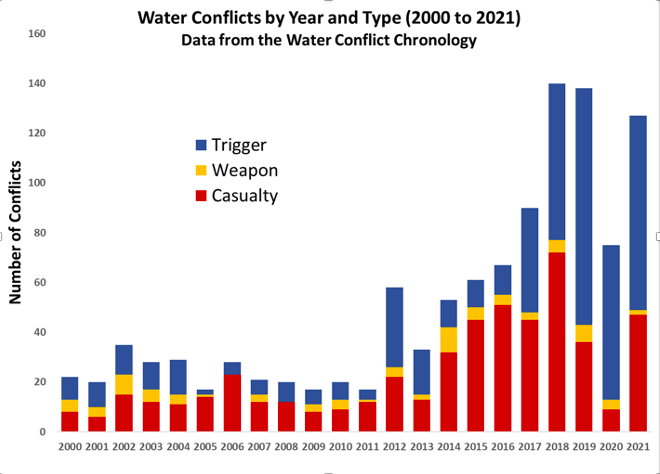