November 5, 2019, Oakland, California — The Pacific Institute has just released a major update to its Water Conflict Chronology, adding over 300 new instances of armed conflicts associated with water resources and water systems, identified from news reports, eyewitness accounts, and other conflict databases. The Water Conflict Chronology is the world’s most comprehensive open-source database on water-related violence. Created by the Pacific Institute in the 1980s, it includes all known verified instances where water and water systems (1) trigger conflicts; (2) are used as weapons in conflicts; or (3) are targets or casualties of violence. The large number of new cases are the result of improved data collection from other global databases on violence, war, and conflict, and especially, a major increase in recent attacks on civilian water systems in the ongoing violence in the Middle East, especially in Yemen, Syria, and Iraq. Also notable is the continuing violence in parts of the Sahel, Africa where traditional herders and farmers are competing for scarce water resources as populations grow, extreme weather events worsen, and land and water become political flashpoints. As with all previous entries, each event is identified with the date, location, category (trigger, weapon, or casualty), a short description, and a verifying citation or source. The Chronology now includes over 900 cases of violence associated with water resources and systems and shows a clear acceleration in recent decades. Figure 1 shows the overall increase in the number of events in the Chronology between 1980 and 2018. 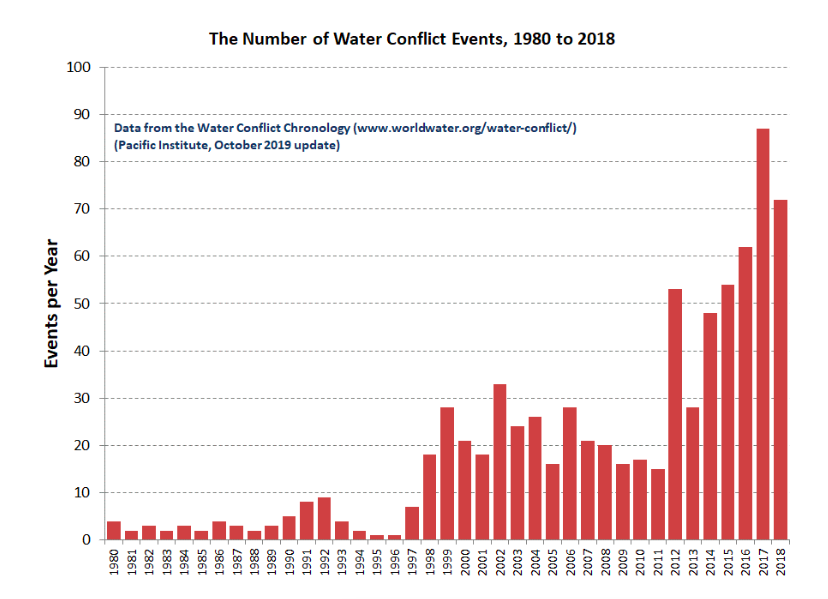 The Pacific Institute’s work on water and conflict has accelerated efforts worldwide to identify strategies for reducing the threat of violence over water resources, including technical and engineering solutions to improve access and efficient use of water, the application of political and legal tools to protect civilian water systems, and new economic approaches to address inequities in freshwater availability and affordability. Additional case studies and analyses will be available from the Institute in the coming months.

The Pacific Institute is a global water think tank that creates and advances solutions to some of the world’s most pressing water challenges through interdisciplinary research and by partnering with a variety of stakeholders. Founded in 1987 and based in Oakland, California, the Pacific Institute envisions a world in which society, the economy, and the environment have the water they need to thrive now and in the future.
Tweet
Share
Share